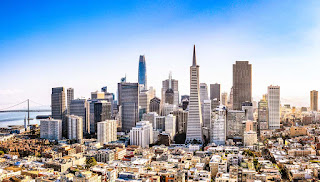 San Francisco is one of the most populous cities in the United States and house prices in this wonderful city are among the highest in the world. This is clearly due to the prestige of the city but also from a deeper reason, namely the lack of halogen in California, due to the "scarcity" of territory.

This problem related to California is amplified if we talk about San Franciso, the demand for houses is much higher than the supply thanks also to an increasingly strong economy. And it is for this reason that the "few" houses that exist are costing a lot and more and more people decide accordingly to choose the rent. Recent statistics estimate that more than 60% of the population will be on rent.

Although mortgage rates have fallen, house prices in this city still remain very high. The San Francisco real estate market is therefore perhaps a bit overrated but some very important data confirm that buying a house in this city can prove to be a great deal. One of the most encouraging data is the unemployment rate, which was 1.8% at the end of 2019, or 0.2 lower than the previous year. Simply put one of the lowest unemployment rates in the whole nation.

In June 2019, Google announced that it wanted to invest $ 1 billion in 10 years to try to solve the problem of lack of homes in the city. The company would make this major investment in what it believes to be the most important social problem in the bay area real estate market. About $ 750 million would be used to convert the commercial properties belonging to the company for residential purposes.

This could guarantee about 15,000 new homes suitable for a population of each income group The remaining funds will be used to build other new homes from scratch. In addition, the figure of 50 million dollars will be put on the plate to help non-profit associations that deal with assisting the numerous homeless people in the city.

The values ​​of the houses of San Franciso have increased considerably and steadily, from 2017 and continuing until 2018. Subsequently, prices have almost stabilized. Over the past year, property prices in San Francisco have increased by 3%. The latest forecast from the San Francisco property market is that house prices will drop 2.3% over the next 12 months.

In addition, according to the most authoritative sources, the situation deriving from the Coronavirus pandemic will significantly contribute to maintaining this stalemate. To date, the average value of a home in San Franciso is $ 1,447,191.

The inhabitants of San Francisco are divided between home owners and tenants. According to authoritative statistics, the large complexes of apartments with one or two bedrooms are the houses present in greatest numbers on the real estate market of the city. Other types of homes that are very present are single-family homes, which have grown a good 30% across the country over the past 3 years.

Therefore, as we have seen from all these statistics, buying a house in San Francisco is certainly not an easy task, especially for those who do not have a high income. Google in this sense is giving a big hand and in about 10 years when its ambitious project is concluded there will be an extra opportunity for everyone.