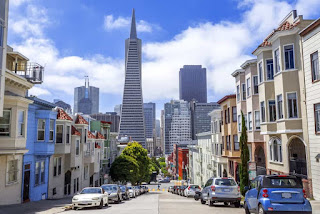 $172,153 is the figure that a recent study found was the salary a person needs to buy and pay for a San Francisco home loan. You will therefore understand that few can afford to buy a house in this city, considering that the average salary is $ 88,000 a year. In confirmation of this thesis, the San Francisco Chronicle has found that only 18% of San Francisco households would be able to pay the mortgage on a medium-sized house thanks to their own income.

The average rent in San Francisco is $ 1,700, which has prompted a large proportion of residents (as much as 65%) to rent their homes. Source: city planning department. What makes San Francisco one of the most expensive cities in absolute terms is due to 2 main factors, namely the scarcity of territory on which it can be built and the presence of many historic houses, which cannot rightly be replaced by modern condominiums to optimize space. This over time has made San Francisco one of the least affordable cities in the entire nation.

According to Zillow, the average asking price for a home in San Francisco is $ 1,299,000. But for this figure you will not get a house that is too luxurious, but an average house, another fact that makes us think is the fact that almost half of the sellers keep more than the asking price from their home.

California is one of the driving forces of the United States economy and, with about 39 million inhabitants, it is also the most populous state. The state has an incredibly diverse economy, with Hollywood, Silicon Valley, the manufacturing industry and agriculture all making a significant contribution. If California were a small nation in its own right, it would automatically be the fifth largest economy in the world.

With a GDP of $ 2.9 trillion, California would rank between Germany and the United Kingdom in the ranking of world economic powers. And reconnecting to San Francisco, the Bay Area ranks 19th in the world for economic activity, with an extraordinary GDP $ 535 billion. The Bay Area is home to 7 million people in nine counties and 101 cities, including San Francisco, Oakland and San Jose. The per capita GDP of $ 74,815 is higher than that of London and Singapore.

Recent data shows a small correction in house prices in San Francisco, in fact, in the first quarter of 2020, homes were sold on average 5% less. This is not a synonym of crisis, but simply a correction of prices compared to the last years of increase.
Posted by JOhn at 11:01 AM